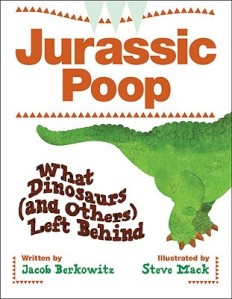 I have a new strategy to reduce the numerous poop conversations between ML and her friends. Give them a poop fact every time they say the word. Below are the books I am reading and a fact or two from each one.

The Truth About Poop by Susan E. Goodman and illustrated by Elwood H. Smith “While they’re hibernating, BEARS don’t poop at all. Their bodies create an internal plug made from feces, old cells, and hair that keeps them from pooping during their winter sleep.”

Poop Happened: A History of the World From the Bottom Up by Sarah Albee and illustrated by Robert Leighton
In medieval times a gongfermor enjoyed one of the higher paying jobs. Enjoy is probably not the best word. Gongfermors jumped into the muck of privy pits and carted the poop away.
A modern day issue, “. . .you’ll appreciate the problems faced by astronauts in a wieghtless environment. In older spacecrafts, the toilet was little more than a plastic bag taped to the astronaut’s behnd. Nowadays. . .” Sorry, you’ll have to check out the book.

I need to tell ML a story about Uncle Kevin. Actually, I’ll wait until we visit Georgia so her Papa can tell it. I did not witness the event. However, it is vivid in my memory because my dad is one of the best storytellers in the world. My college graduation was outside beneath large oak trees. I bet you know where this is going. . . Yep, Uncle Kevin’s button-down, plaid shirt got hit by bird poop. Actually, I learned in Poop: A Natural History by Nicola Davies and illustrated by Neal Layton, birds poop and pee out of the same hole. The dark stuff is feces and the white stuff is their pasty urine. Who knew?