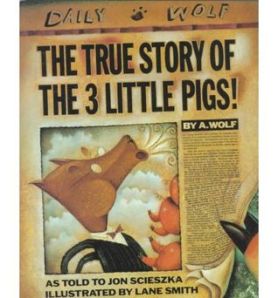 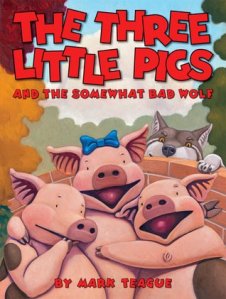 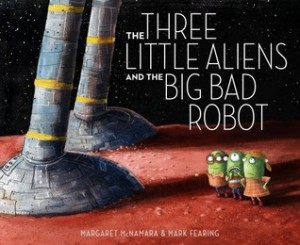 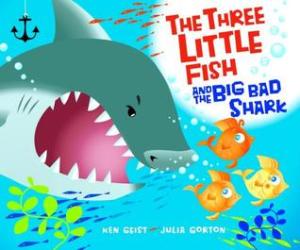 My introduction to fairy tales told from a different viewpoint was in the early nineties. In my opinion, The True Story of The 3 Little Pigs By A. Wolf as told to Jon Scieszka and illustrated by Lane Smith is one of the best books from the 20th century.

The Three Little Pigs and the Somewhat Bad Wolf by Mark Teague follows the traditional tale somewhat. However, there is perfectly legitimate reason the Wolf is running around town huffing and puffing houses down. He’s hungry. The donut shop is closed. . . the hot dog stand is locked. . . and the pizza parlor will not let him in.

Some fairy tales follow the same plot but have different characters. In The Three Little Aliens and the Big Bad Robot by Margaret McNamara & Mark Fearing the robot meeped, “Then I’ll crack and smack and whack your house down!”

In The Three Little Fish and the Big Bad Shark by Ken Geist and Julia Gorton, it’s all about the fish and their finny fin fin. The shark doesn’t huff and puff. He munches and crunches.

What’s your favorite fairy tale with a twist?