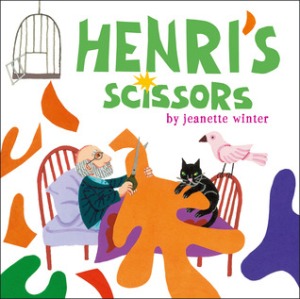 ML loves to cut construction paper. It started the second she mastered scissors. In the beginning, she cut and cut and cut one piece of paper into as many pieces as she could. White printer paper was her specialty. Currently, her focus is cutting abstract forms from construction paper. Then, taping them on her walls and ceiling.

Recently, the library received a book called Henri’s Scissors by Jeanette Winter. It’s one of the loveliest books of the year. The story is a simple, elegant picture book biography about Henri Matisse. It focuses on his later years when he was infirm and began cutting out shapes. He called it “painting with scissors”