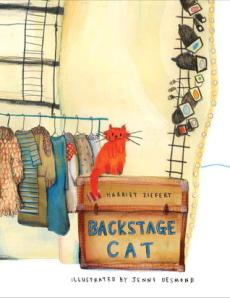 ML attended camp at a local community theatre last week. The Raleigh Little Theatre does an amazing job. It wasn’t just silly fun. It was professional and age-appropriate. A confidence building week.

There are dozens of picture books about not getting the part you want in a dance recital or school play. I’m glad. It helped when ML didn’t get a speaking part in the kindergarten’s spring musical production.

However, picture books about theatre whose main premise isn’t about not getting the part you want or forgetting your lines, are few and far between. Our favorites are below.

In Backstage Cat by Helen Ziefert and illustrated by Jenni Desmond, the star of the show brings her cat to work, but he quickly escapes from her dressing room. Through the cat’s eyes, we learned about the variety of people involved in putting on a show. . . makeup artists, costume creators, stage manager, stagehands, electricians, orchestra, and cast members.

In The Pest in Show: Starring Ladybug and Fly music and lyrics by Victoria Jamieson, Ladybug is the star of a broadway show. But her brother, Fly, is trying to steal the show. With modified lyrics to various childhood tunes, it’s fun to sing along.

Try Ladybug’s rendition of The Wheels on the Bus:
“Kid brother Fly’s a pest pest pest,
All through the town.”

The Broadway Posters on the inside cover for buggy broadway shows are reason enough to check it out. . . Fly School Musical. . . Antie. . . Bugspray. . . Pest Side Story. . .