David Adler sent me an advanced copy of his new series, Danny’s Doodles.  His first book, The Jelly Bean Experiment follows the antics of two extremely different personalities, Danny and Calvin.  According to Danny, “My new friend is 100% weird.”   Danny is an average baseball playing fourth grader.  When Danny and Calvin team up for an experiment it  is anything but average.  The result the beginning of a friendship… a dynamic duo for a new series  of  books for boys.

Unfortunately, the next book in the series, The Donut Dilemma won’t be published until the fall of 2014.   Check out the books below for other ideas.

Adventures of Jo Schmo by Greg Trine and art by Frank W. Dormer – Wait a minute… the main character is a girl.  Yes, but one book is called Wyatt Burp Rides Again… and she’s a superhero.

Alvin Ho by Lenore Look and illustrated by LeUyen Pham – With titles like Allergic to Girls, School and Other Scary Things, Allergic to Babies, Burglars and Bumps in the Night, and Allergic to Camping, Hiking and Other Natural Disasters…   readers are destined to find a title highlighting their greatest anxiety.  If you want your home filled with laughter, buy Alvin Ho.

Calvin Coconut by Graham Salisbury and illustrated by Jacqueline Rogers – Most boys I know live in North Carolina or Georgia.  A book about Calvin who lives close to the beach in Hawaii is exotic.  Kung Fooey,

EllRay Jakes  by Sally Warner and illustrated by Jamie Harper – Straight from the publisher Penguin’s website.  “From trouble with bullies to the need to impress friends, EllRay Jakes finds himself in situations that young boys can relate to.”

George Brown, Class Clown by Nancy Krulik and illustrated by Aaron Blecha – What boy doesn’t find burping, toilets, wedgies, and boogers funny?  These subjects and more are covered in this series of 11 books. 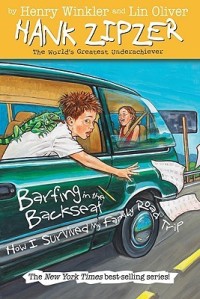 Hank Zipzer by Henry Winkler (best known as the Fonz) and Lin Oliver and illustrated by Jesse Joshua Watson.  It’s hard not to be a winner with the Fonz as the author and titles like Barfing in the Backseat.   The Hank Zipzer website states, “Inspired by the true life experiences of Henry Winkler, this winning series about the world’s greatest underachiever is funny, touching, and deals with learning differences in a gentle and humorous manner.”

Stink by Megan McDonald and illustrated by Peter H. Reynolds – Stink is the brother to Judy Moody, a popular series first published in 2000.  According to Megan McDonald, his own series was conceived when she walked into a classroom yelling, “Stink! Stink! Stink!”

Disclaimer:  I’ve only read the first chapter of most of these.  But various friends promise me their boys love them.