I’m taking orders for personalized summer reading lists.  My first request was for a rising 4th grade girl who LOVES dogs.  There are 238 chapter books with the subject heading of dogs at my branch alone.  Below are my recommendations for AB.  I’ve added a story about a cat and another about a sassy girl to provide a little variety to AB’s summer reading.

Rain Reign by Ann K. Martin – “Rose Howard is obsessed with homonyms. She’s thrilled that her own name is a homonym, and she purposely gave her dog Rain a name with two homonyms (Reign, Rein), which, according to Rose’s rules of homonyms, is very special. Not everyone understands Rose’s obsessions, her rules, and the other things that make her different – not her teachers, not other kids, and not her single father.  When a storm hits their rural town, rivers overflow, the roads are flooded, and Rain goes missing. Rose’s father shouldn’t have let Rain out. Now Rose has to find her dog, even if it means leaving her routines and safe places to search.” (from publisher’s website)

Handful of Stars by Cynthia Lord – “When Lily’s blind dog, Lucky, slips his collar and runs away across the wide-open blueberry barrens of eastern Maine, it’s Salma Santiago who manages to catch him. Salma, the daughter of migrant workers, is in the small town with her family for the blueberry-picking season.  After their initial chance meeting, Salma and Lily bond over painting bee boxes for Lily’s grandfather, and Salma’s friendship transforms Lily’s summer. But when Salma decides to run in the upcoming Blueberry Queen pageant, they’ll have to face some tough truths about friendship and belonging. Should an outsider like Salma really participate in the pageant-and possibly win?” (from publisher’s website)

Honey by Sarah Weeks -“Melody has lived in Royal, Indiana, for as long as she can remember. It’s been just her and her father, and she’s been okay with that. But then she overhears him calling someone “Honey” and suddenly it feels like everyone in Royal has a secret. It’s up to Melody and her best friend, Nick, to piece together the clues and discover why Honey is being hidden.  Meanwhile, a dog named Mo is new to Royal. He doesn’t remember much from when he was a puppy, but he keeps having dreams of a girl he is bound to meet someday. This girl, he’s sure, will change everything.” (from publisher’s website)

Dog Diaries by Kate Klimo – “For anyone who has ever wanted a puppy, the DOG DIARIES series tells a dog’s story in a new way–from a dog’s point of view! Focusing on a different breed for each book, starting with a Golden Retriever and a German Shepherd, these stories are based on true dog stories or on true-to-life situations.” (from publisher’s website) 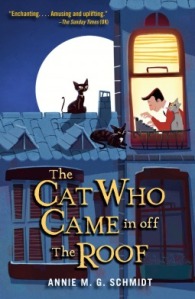 The Cat Who Came in Off the Roof by Annie Schmidt – “An act of kindness brings shy reporter Mr. Tibble into contact with the unusual Miss Minou. Tibble is close to losing his job because he only writes stories about cats. Fortunately, Minou provides him with real news. She gets the juicy inside information from her local feline friends, who are the eyes and ears of the neighborhood. Tibble is appreciative, but he wonders how she does it. He has noticed that Minou is terrified of dogs and can climb trees and rooftops with elegance and ease. . . . It’s almost as if she’s a cat herself. But how can that be?” (from publisher’s website) 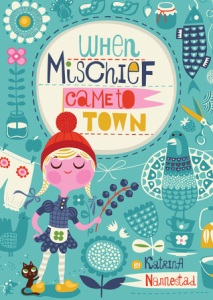 When Mischief Came to Town by Katarina Nannestad – “When Inge Maria arrives on the tiny island of Bornholm in Denmark to live with her grandmother, she’s not sure what to expect. Her grandmother is stern, the people on the island are strange, and children are supposed to be seen and not heard.   But no matter how hard Inge tries to be good, mischief has a way of finding her.     Could it be that a bit of mischief is exactly what Grandmother and the people of Bornholm need?” (from publisher’s website) 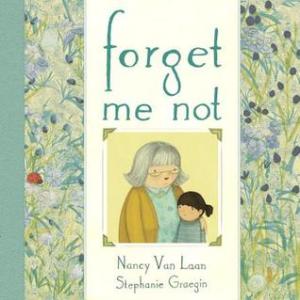 Yesterday, I wrote about a woman reading picture books to her mother suffering Alzheimer’s Disease.  Today, I’m highlighting two books about grandmother’s suffering this horrible disease. It’s a sensitive subject for me.  My grandmother went from a vibrant lady tending her garden and orchard, making homemade preserves and cooking the best country fried steak in the world to not recognizing her children or grandchildren.

Months ago Forget Me Not by Nancy Van Laan and illustrated by Stephanie Graegin arrived at the library.  I read it to ML.  Then, told her about my grandmother.  How she would make sweet tea, then forget she had added sugar.  So she added more which made it too sweet to drink.

I told her about the time Grandmommy was visiting for Christmas.  On Christmas Eve, my family attended the candlelight service at our church.  Grandmommy and I didn’t; because I was sick with the flu.  She wanted to stay home and care for me.  Every few minutes she’d pop in my room asking, “Do you need anything?” She didn’t remember she had just checked on me. It’s heartwarming to think of her concern today; but as a feverish, aching teenager I didn’t appreciate it.  When my family returned, I told them in no circumstances should Grandmommy be allowed to check on me again.  I share stories like this with ML because it’s important to talk about hard things before she experiences them.  The likelihood someone she loves will experience dementia is high.

I’ve read other picture books about grandparents with Alzheimers Disease.  Forget Me Not is the best.  In a comforting narrative it shares the realities of the disease, the fears of a child as her grandmother starts forgetting things, and how that child copes.  The pencil and ink washed illustrations evoke a feeling of love and security.

I didn’t devour Half a Chance by Cynthia Lord; instead I kept coming back to it over the course of a month.  Every few weeks, I go through the library books at home and decide which ones I know I’ll never get to or finish.  Every time I saw this book in the pile, I couldn’t bring myself to return it.  It’s a beautiful story about tween friendships, family dynamics, a grandmother in the beginning stages of Alzheimer’s Disease and new beginnings.  It includes one of the most important quotes I’ve read in a children’s novel.

“Oh, people will think what they think!” Grandma Lilah said.  “Don’t ever choose the people who don’t matter over the ones who do.” 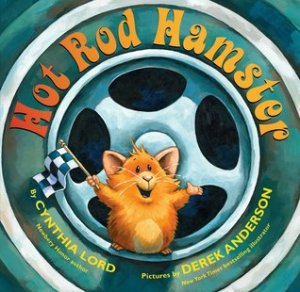 Last week, a father asked for picture books about race cars. I only found one on the shelf and very few in the library system.

The dad was happy with the one I found, Hot Rod Hamster! by Cynthia Lord and illustrated by Derek Anderson. Our interaction left me wondering why so few? A large portion of children are interested in race cars. Authors, illustrators and publishers need to step up to the plate.

In the meantime, enjoy our favorite car books. The rhythmic and rhyming text in The Srubbly-Bubbly Car Wash by Irene O’Garden and illustrated by Cynthia Jabar is fun to read. I dare you to say clickety-clackety, rattley-rackety, drippity-droppity, boottom-to-toppity, lathery-blathery, scrubbly-bubbly CAR WASH. . .ten times fast.

Rattletrap Car by Phyllis Root and illustrated by Jill Barton is one of my go to’s when I need to read to a crowd of all ages. “chocolate marshmallow fudge delight” keeps this car moving. Without it, there wouldn’t be a way to replace the flat tire with a beach ball or the floorboard with a surf board.