It takes a village to raise a child and it takes an army to lead a civil rights movement.  As we honor Martin Luther King Jr., I’m reminded of several books published this year that show it truly was an army of people making a difference. 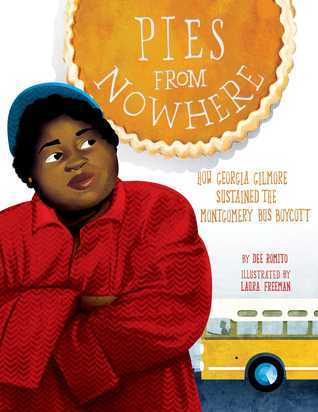 Have you ever heard of Georgia Gilmore?  I hadn’t either until last November when I read Pies from Nowhere:  How Georgia Gilmore Sustained the Montgomery Bus Boycott by Dee Romito and illustrated by Laura Freeman.  The blurb about the book says “When the bus boycott began in 1955 in Montgomery, Alabama after Rosa Park’s arrest, Georgia Gilmore knew just what to do.  She organized a group of of women, the Club from Nowhere, who cooked and baked to fund-raise for the boycott.”  Martin Luther King, Jr. used his words and voice to make a difference.  Georgia Gilmore used her cooking.  Read this book and learn the nickname Martin Luther King, Jr. gave Georgia; but don’t only focus on the story.  The illustrations are as wonderful as the story. 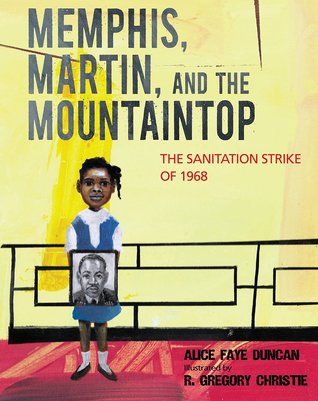 Memphis, Martin and the Mountain and the Mountaintop:  The Sanitation Strike of 1968 by Alice Faye Duncan and illustrated by R. Gregory Christie soars.  Info from the front of book, “Author Alice Faye Duncan based the character of Lorraine Jackson on a teacher who participated in the Memphis Sanitation Strike as a child.  Using a riveting combination of poetry and prose.  She reveals the inspiring story of Dr. Martin Luther King, Jr.’s final stand.”  I’m embarrassed to say I didn’t know anything about the sanitation strike; nor did I know Coretta Scott King led the strike days after her husband’s assassination.  The book says it best.  “Despite her broken heart, Mrs. King and members of SCLC helped to keep her husband’s pledge on April 8, 1968.”

I’ve got a lot to learn.