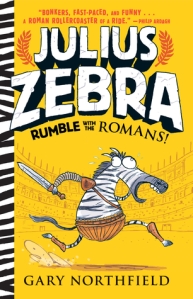 “What happens when you you mix the gladiatorial combat of ancient Rome with a fast-talking creature who is DEFINITELY NOT A STRIPY HORSE?” (Candlewick Press webpage)

The answer is Julius Zebra, the coolest zebra to enter children’s literature.  I read a portion of the first book a few weeks ago.  Until, a mother was looking for a Diary of a Wimpy Kid book.  There were none on the shelf so I added her name to the request list.  In the meantime, I encouraged her to take home Julius Zebra:  Rumble With The Romans by Gary Northfield.

So far it appears the second book Julius Zebra: Bundle With the Britons is only available for Kindle.  I hope paper copies land at the library before school ends on June 9th.