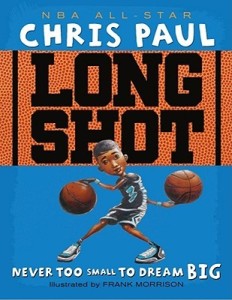 In honor of the Duke Blue Devils… a team in which I have a love/hate relationship.  I loved them in the early nineties when my brother attended Duke.  In the late nineties, my allegiance changed because I enrolled in library school at UNC-Chapel Hill.  In theory, Duke is my arch enemy.  However,some of my favorite people, including ML, are fans.  With a 9:18 tip-off, I’m not telling ML the NCAA championship game is tonight.  As a mother, I would like Duke to win.  My grumpy, non-morning person child would actually smile before I dropped her at school.  As a Tarheel, I hope Wisconsin wins by twenty-five.  Either way, I’m content.

Here’s a few books about basketball.  Each one is deserving of a championship title.

Hoop Genius:  How a Desperate Teacher and a Rowdy Gym Class Invented Basketball by John Coy and illustrations by Joe Morse – Don’t miss this illustrated, non-fiction book.  It chronicles the beginnings of basketball through simple text and historically accurate illustrations.  Compare the clothing throughout the book with the last illustration in the book.   A unique and refreshing approach for teaching the history of basketball.

Long Shot: Never Too Small To Dream Big by Chris Paul and illustrated by Frank Morrison – An autobiographical picture book by NBA star Chris Paul.  Picture books written by celebrities are usually disappointing; but this one is a slam dunk.  The story is well written and the illustrations highlight the anxiety of basketball tryouts and the elation when one makes the team.

H.O.R.S.E.  A Game of Basketball and Imagination by Christopher Myers – This book reminds me of the many times my brother and I played H.O.R.S.E in our driveway as children.  The players in this book are more creative in their shots; but the trash talk is similar to what you would have found at our house in the eighties.  As always, Christopher Myers illustrations are out of this world.