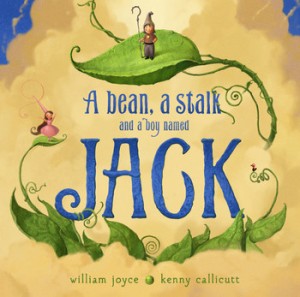 A Bean, a Stalk and a Boy Named Jack by William Joyce and Kenny Callicutt – “You might think you know the story of Jack and the Beanstalk, but you might want to think again. In this fairy tale with a twist, it hasn’t rained in days and the king has dictated that something must be done—his royal pinky is getting stinky! With a little magic from a wizard, young Jack, paired with his pea pod pal, will find a GIANT reason as to why there’s no water left in the kingdom…and prove that size doesn’t prevent anyone from doing something BIG.”

Why should you read this book?
It’s a boisterous yarn including puns, stinky pinkies, Princes Blah Blah Blah, a bean, a stalk and a boy named Jack created at Moonbot Studios.  You must read this funny book.  Preschoolers will enjoy the story.  Early elementary school students will love the merging of a few well known classics from fairy tales and Mother Goose.  Plus the illustrations are a lively delight.