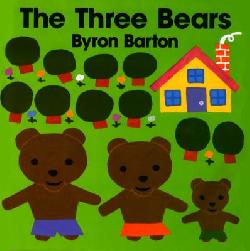 ML, her friend, my coworkers and myself marched in the Christmas Parade to represent the library.  I was certain ML’s choice would be dressing as Goldilocks.  It wasn’t.  When I told her about the costumes she screamed, “I want to be Baby Bear.”  Her friend agreed to be Goldilocks.  ML’s friend has long, golden hair so it worked out great.  Smart choice by ML.  It was freezing and the bear costume was toasty.

There are many variations on the story Goldilocks and the Three Bears.  Above is a picture of a classic, simple edition by Byron Barton.  Below are some of the more unusual ones.  Long day marching in the cold;  all the descriptions are straight from the library catalog 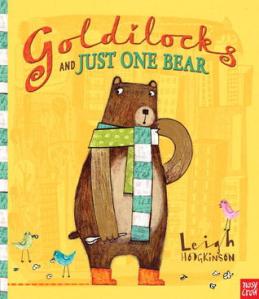 Goldilocks and Just One Bear by Leigh Hodgkinson – “Little Bear, all grown up, finds himself lost in a noisy, busy city where he happens to bump into someone with golden hair who remembers exactly how he likes his porridge.”  ML has visited NYC two times.  One more than I.  She enjoyed this version with a city twist.

Goldilocks and the Three Dinosaurs by Mo Willems – “When three hungry dinosaurs lay a trap hoping to catch something to eat, Goldilocks who never listens to warnings, walks into their house and springs the trap.” Mo Willems and Dinosaurs… need I say more.  We haven’t read it but ML just read the title over my shoulder.  I asked, “What do you think.”  Her response, “Sounds funny.”  I’ll bring it home next week.

Goldie Locks Has Chicken Pox by Erin Dealey and illustrated by Hanako Wakiyama – “When Goldie Locks comes down with chicken pox, she is teased by her brother and is unable to visit with Bo Peep, Little Red, and other friends.”  We own this one.  ML thinks it’s hilarious.  Luckily, she shouldn’t experience the itchiness of chicken pox.  I still remember. However, the disappointment about missing my kindergarten field trip to Mayfield Dairy due to chicken pox was more traumatic than red, itchy bumps.

The Three Bears’ Christmas by Kathy Duval and Paul Meisel – We haven’t read this one yet.  My coworker told me about it during the parade.   “After taking a walk on Christmas Eve while their freshly baked gingerbread cools, Papa, Mama, and Baby Bear arrive home to encounter another “trespasser,” who does not have golden hair but wears a red suit and leaves present.”  ML loves funny stories. It’s certain to be a hit.

No post tomorrow… We’re decorating the tree or as ML says WE’RE DECORATING THE CHRISTMAS TREE!!!!!!

2 thoughts on “Christmas Parade – Goldilocks and the Three Bears”