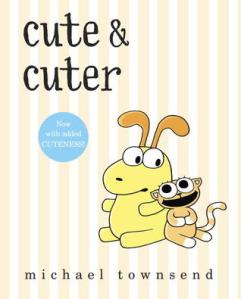 ML’s cousin is my roommate from library school’s son. Four-year-old Henry and “almost seven” ML don’t see each other enough. When they do, it’s a whirlwind of fun. Saturday night, we planned to repeat last visit’s fun. . .pizza party, sprinkler and silliness. We did.

Then, ML and Henry performed a bunch of puppet shows. Henry’s best show included a rattlesnake who meowed. ML’s favorite starred a purple fish hat who ate and pooped pink dragons. I’m trying to curtail ML’s scatological humor, but even I laughed.

After that, we read books. ML read No, David by David Shannon. I read a new picture book in comic book form, Cute & Cuter by Michael Townsend. Both were hits. Henry liked them so much we sent the books home with him. The nuances in Cute & Cuter require multiple readings. I’ll check out another copy so ML can further explore Janie Jane’s adventures. Everyone’s favorite line, “I think she’s cuter than a dozen pink hamsters dancing in a field of flowers while eating cupcakes!” is illustrated on the inside covers of the book.

From now on, our “cousin time” will include puppets and books.